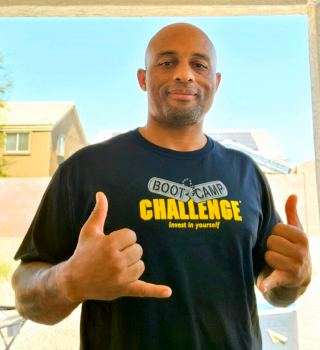 Ramee is a graduate of the National Personal Training Institute of Orlando and a certified personal trainer with the National Strength and Conditioning Association. Ramee is also a Tactical Strength and Conditioning Facilitator under NSCA and holds current certifications in Functional Movement Screen Level 2, Functional Capacity Screen, and Precision Nutrition Level 1 coach. While serving in the Marine Corps, Ramee began his journey by becoming a physical training instructor in Marine Corps Martial Arts, High Intensity Tactical Training (HITT) and Aquatics Maximum Power Intensity Training (AMP-IT) programs. After he retired in 2014, Ramee officially started his career as a fitness coordinator for a Marine Corps base in Okinawa, Japan. For 3 years, not only did he train service members but ran fitness programs and challenges for their families as well. Ramee brought this type of training to Arizona in 2019 and created Yuma Fun and Fitness LLC which offered personal training and boot camp programs in Yuma, Arizona. And, now he is bringing Boot Camp Challenge® to the AZ!

Ramee is married and a father of four children ages 8, 14, 16, 19. They are currently living in Phoenix, AZ where he participates in boxing, kickboxing, and Muay Thai training at local gyms in his spare time.

"Problems cannot be solved by the same mindset that created them." ~ Albert Einstein